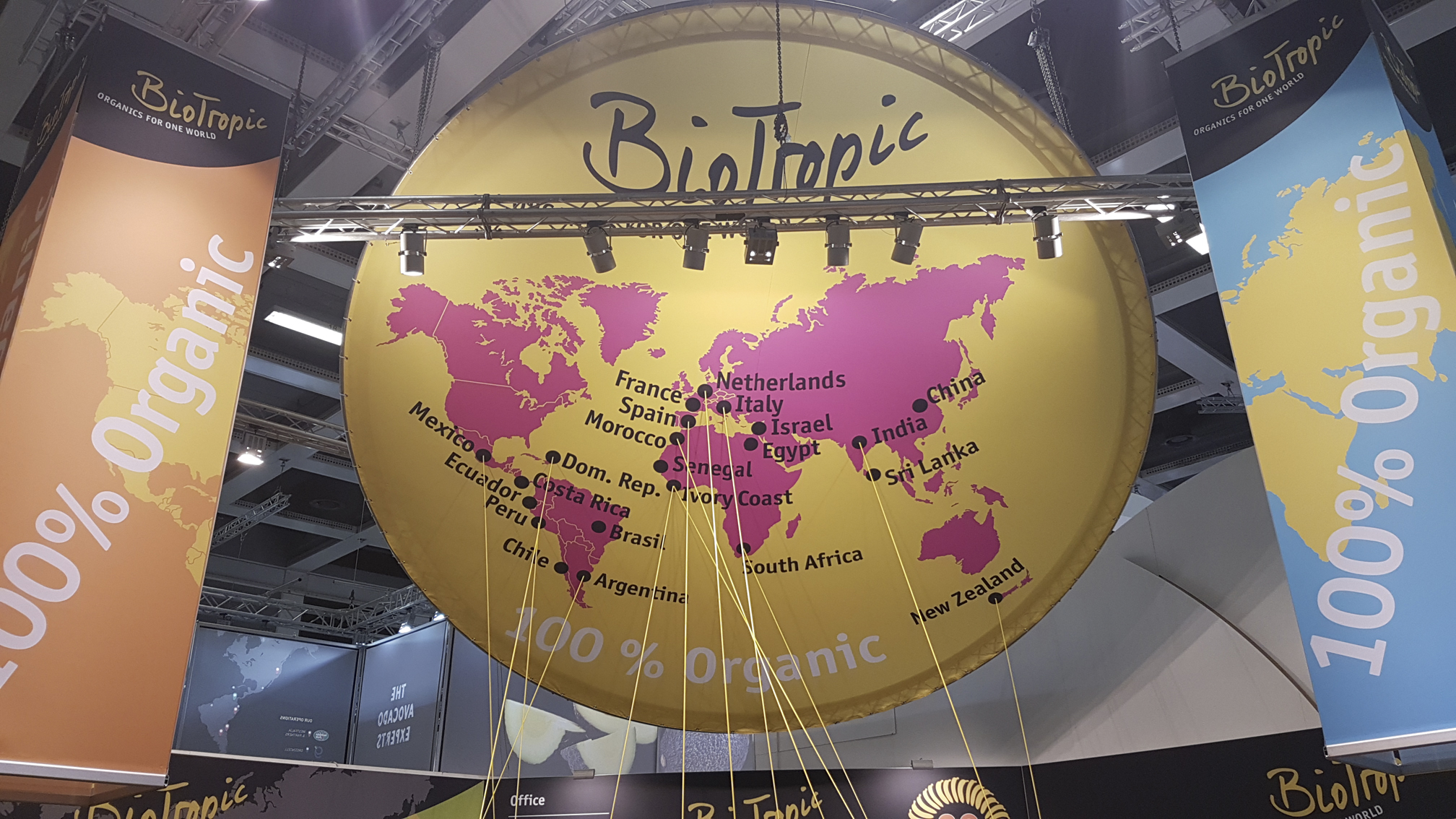 The international fresh produce trade show Fruit Logistica celebrates its 25th jubilee this year and we took part in this with our own stand.

2017 is also a jubilee year for BioTropic as we have been committed to providing organic produce for the whole world for twenty years. This began in 1997 with the export and import of organic bananas. A great deal has happened in our company since then. Our work is distributed throughout the whole world and we are usually able to offer our extensive range of organic fruit and vegetables year-round. We have also started many of our own cultivation projects and are able to work with many worldwide sites locally. This year, our most recent site started work in Costa Rica.

Although the number of employees has grown continuously in recent years, the good sense of cooperation and understanding between the colleagues remains. This can be seen, in particular, at a trade fair like the Fruit Logistica where a selection of employees from all sites come together. In keeping with the international nature of the trade show, a great deal of English was spoken at the BioTropic stand. The familiar and helpful cooperation amongst the employees keeps us, as a global company, together. Our new Costa Rican colleague Lisbeth Mora was also on the stand this year and welcomed customers and interested individuals. “I felt really at ease amongst my new colleagues and we discussed many work-related experiences from the worldwide offices,” she said.

The positive effects of the direct exchange apply not only to the colleagues but also to the customers, partners and interested individuals who meet at the stand. Whilst business communication via digital media is often very abstract, things are much more personal and livelier when the trade show participants are able to talk to and get to know each other in person. “This only really works in this way at a trade show,” says Udo Bürk, Project Manager at BioTropic.

Just as BioTropic has grown continually, the Fruit Logistica has also undergone a major development: “The trade fair now has much more influence in the international trade show context than it used to have and the number of growers from overseas has also grown considerably,” says Volker Schmidt, Operational Manager of the Dominican office who has been with the company from the start. Regina Kerz, Marketing Manager in Duisburg, adds, “This huge trade show is enormous and even I haven’t seen everything here yet.”

We are very pleased that our stand was really attractive also this year or, as our long term employee Ronald Vianen said, with a wink, “If we had a euro for every picture which was taken of our stand we would certainly have had enough to cover the stand costs.”

The strenuous trade show ended with the BioTropic evening which is, meanwhile, a regular fixture, at the Berlin restaurant "3 Schwestern". Here 100 customers, suppliers and employees of BioTropic met in the purist, monastery-style setting of the restaurant, a former hospital, and this was for many a real highlight of the Fruit Logistica.

To take part in an international trade show does, of course, also involve the generation of new business, making new contacts, the development of new ideas and discussing already existing ones. And, of course, being seen on a global platform. In other words: official business. And, as far apart as the BioTropic colleagues may work from one another, their goal is the same: to provide organic produce for the whole world.

According to the trade fair organiser “Messe Berlin GmbH,” more than 3,100 exhibitors from 84 countries took part in this year’s Fruit Logistica from 8. to 10. February which was attended by more than 75,000 trade visitors.