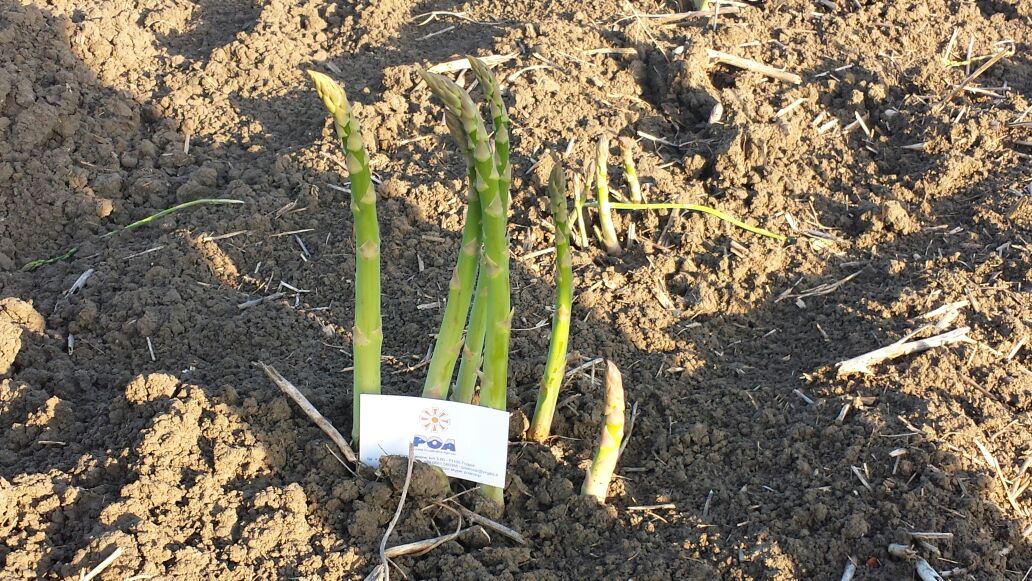 March sees the start of the harvest of green asparagus from Italy – the season lasts until mid June. Asparagus is one of the vegetable varieties of which only the young and tender shoots are eaten. The green variety is particularly popular in southern Europe.

In contrast to white asparagus which grows underground when it is harvested, green asparagus has already been exposed to a lot of sunlight and is harvested once it has grown a few centimetres above the soil. Through the sunlight exposure, the vegetable forms the plant pigment chlorophyll which gives it its green colour. Green asparagus contains more nutrients and valuable vitamins than white asparagus and also has a more intense taste and doesn’t require much peeling, if at all. Hardly surprising, therefore, that green asparagus was very popular already with the ancient Romans.

Our green asparagus is grown by POA, an Apulian grower cooperation near Foggia, at the lower end of Italy’s “boot”. The region, which is defined by agriculture, is ideal for asparagus production with fertile soil and warm temperatures although a sudden temperature drop has currently delayed the asparagus harvest by a few days.

The founder of POA is Antonio Ippedico who took over the business from his father who was one of the first asparagus growers in the region in the eighties. Antonio brought together several agricultural enterprises and founded the grower cooperation POA. In 2004 he converted his production to organic cultivation as he wanted to ensure environmental protection and biodiversity on his fields whilst the cooperation expanded.

Business is going well and POA, meanwhile, has three warehouses with a fourth currently being built which has been designed especially for asparagus production. Asparagus is the cooperation’s top product. Thanks to its high quality, the grower cooperation supplies customers in Italy and abroad e.g. Germany, Austria, Great Britain and North Europe.