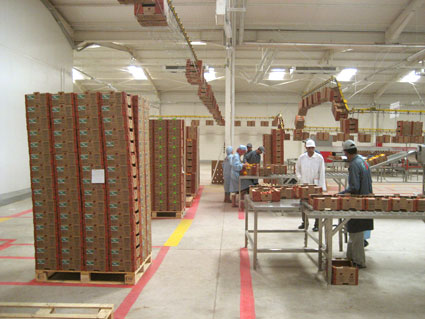 Whilst it is slowly getting colder in Europe, it is now peak season for many organic vegetables at the Moroccan organic producer PBS (Primeurs Biologiques du Souss). A first shipping from the new harvest will soon be on its way to Europe: the first thing that PBS will delivering are chillies and red and yellow organic peppers in mid-November.

Two of our BioTropic colleagues – our French Operations Manager Odile Bouron and our Agricultural Engineer Mauro Finotti from Italy – recently hit the road and visited the organic company on the fertile plains of Souss. Odile is responsible for coordinating the production process between PBS and BioTropic and Mauro is responsible for quality assurance.

Lahcen El Hjouji, Managing Director of PBS, showed our BioTropic colleagues three farms on which various types of vegetable grow over approximately 106ha: red and yellow peppers, Ramiro peppers, courgettes, chillies, runner beans and country and Armenian cucumbers. There is also another courgette cultivation over 25ha of open land. Next spring, Lahcen El Hjouji would like to try out a small Hokkaido pumpkin cultivation over 2ha. The group also jointly discussed the new cultivation plans for next year: in addition to the current vegetables, a test series with sugar snap peas is also due to be planted. We have currently been working with PBS for five years.

Lahcen El Hjouji is really happy with the current season, firstly thanks to the good weather conditions: enough rain last winter ensured an optimal supply of water, which was only used sparingly anyhow due to the use of drip irrigation. Secondly, the fruits in the greenhouses were also able to grow without any trouble thanks to the not too hot summer.

The BioTropic visit shortly before the harvest is a good time for the annual audit by Mauro, our Agricultural Engineer, because he is able to best assess current production. For this purpose, he takes fruit and leaf samples and has them examined in an independent laboratory.

A special feature is the PBS seedling nursery. The majority of vegetable crops are home-grown at PBS and not simply purchased. As the phrase goes, this means: you know what you’ve got.

In peak season, which lasts from October to May, approximately 450 employees, the majority of whom come from surrounding villages, work on PBS farms and in the PBS packing station. The harvest is washed and packaged in the packing house. This central shipping logistics ensures consistent controlling of the organic quality: only organic vegetables are processed at PBS.