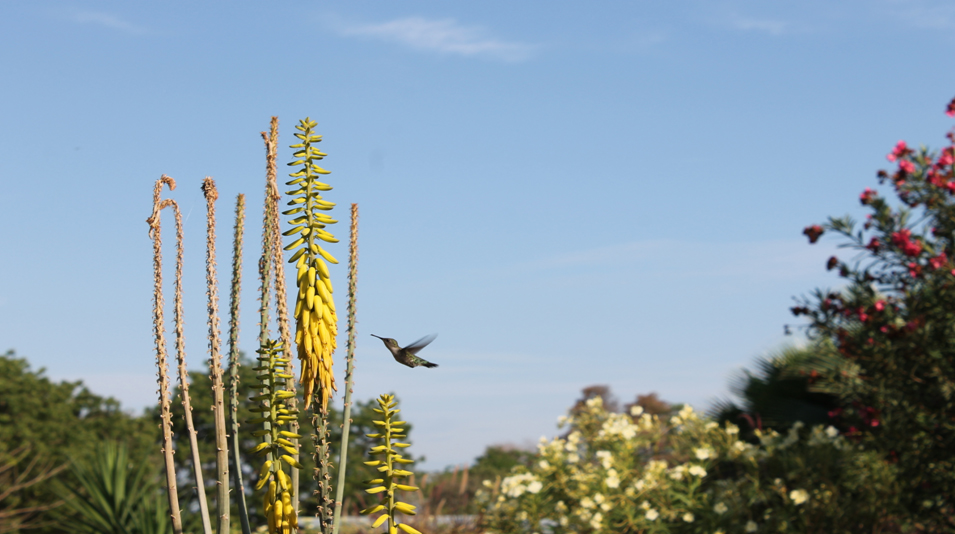 The first thing you see when you enter the Eco Centre is the lake and lots and lots of greenery. Filled with freshwater, the lake has been affectionately called ‘The Lagoon’ by employees. It did not occur naturally, however, but was created as part of a develoPPP.de project between 2012 and 2014. All the other buildings and areas, which make up the nearly 5 hectares of the Cibao Ecopark, also came about at this time.

In the North
A nature trail leads to the different areas of the park: In the North, there is the section for renewable energy. A photovoltaic system and a wind turbine provide alternative sources of energy. The planned solar plant will soon be able to provide energy for the whole area.

On the left is the compost plant – about 48,600 kilos of compost are produced every 60 days. The whole Finca can be supplied by it.

On the right is the large green house. Various crops such as beans, peppers, sweet potatoes or herbs grow on 600 sqm of land. The produce which is produced is used in the centre’s own kitchen and larger yields are sold on the market.

In the East
To the east of the lake, there are winding paths and rickety little wooden bridges which span across a stream. Here, the main focus is on endemic and at-risk plant types. Here grows, for example, the Cacheo palm, which is one of the plants in the restricted area. The Jamaican caper, on the other hand, is a plant which is under threat in the Dominican Republic. This can also be found in the park.

All important plants have a sign. Information, including the plants’ Spanish names, is provided: the scientific name, related plants, country of origin and the plants’ various uses.

There are over 130 types of plants on display. The majority come from a Dominican nursery. Many seeds or seedlings have also been brought in by employees of Biotropic.

In the South East
If you follow the trail southwards, you will find the banana plants section. Not only do the ubiquitous “Cavendish” bananas grow here, there is also a compilation of the many different shapes and colours of the Musa plant: Be they red-skinned, with small or large fruits, fat or thin, or apple-flavoured. The aim is to cultivate and maintain different varieties of banana.

Behind the banana section, there is the constructed wetland which covers 25 square metres. It purifies the incoming waste water from a neighbouring prison and diverts the filtered water into Finca’s irrigation system. The plant runs entirely without electricity because it is based on a near-natural process. The waste water flows through two basins. The first basin is filled with coarse gravel. Both parts are planted with papyrus and bulrushes - two plants which undergo symbiosis with special bacteria in their roots. These remove nitrates and phosphates from the waste water, which provide the environment in which harmful bacteria and germs thrive.

General
The gardener, Basilio Torres, and his two assistants are responsible for the care and further development of the plant. Intern on the Weltwärts Programme, Annika Riehm, lends a helpful hand for 4 hours every morning. Technical and scientific direction is carried out by Aquilino Cruz and Volker Schmidt. They are also responsible for the Dominican branch of Biotropic.

The training centre completes the plant and the Biotropic office is also located here.

Since opening, the park has already had to deal with a major challenge. In 2015 there was very little rain. The water scarcity not only threatened the plants but also impeded the regular growth of the bananas due to be sold.

In 2016, the situation has eased somewhat. When you consider the fact that the Cibao Ecopark is only 2 years old, it’s amazing how quickly the vegetation has developed into something so rich and beautiful.