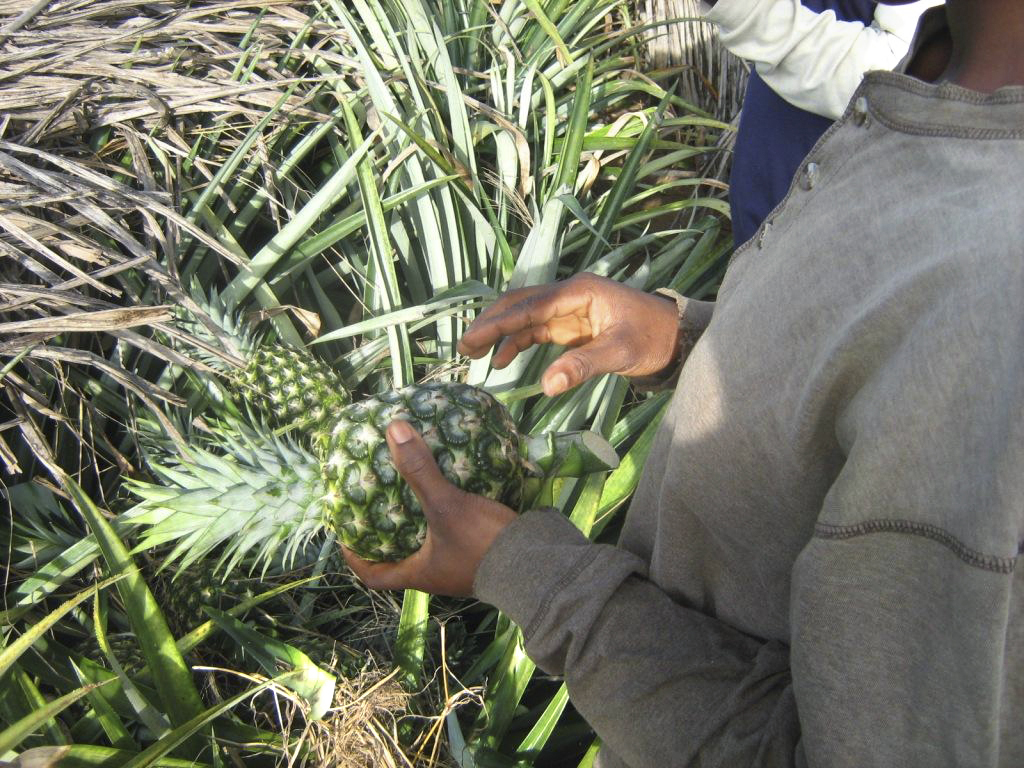 In 2008, we launched an ambitious project in the tropical Ivory Coast: the adoption of organic cultivation in the country as part of a PPP (Public Private Partnership) programme. Pineapples were the first certified organic products of Ivoire Organics – the regional producer group made up of small farmers with which we work. The German PPP support partner was SEQUA, a non-profit implementing organisation in the German business sector.

Farming tools – such as a tractor with a trailer as well as a pick-up truck and seeds – were organised by BioTropic in Europe and then shipped to West Africa. Regular seminars and training courses on the topics of organic cultivation methods and certification rounded off the project.

The manager of the overall project is Kuemkwong Siemefo, our Africa expert at BioTropic. He has very varied work duties involving the planning and coordination of cultivation, harvesting and handling fruit and organising shipping to Europe. He also organises packaging materials, required certifications and employee training. In addition, he is maintaining regular contact with chambers of commerce and official bodies in the African countries.

The official language of the Ivory Coast is French. Agricultural raw material exports such as cocoa and coffee have an important role in the country. The illiteracy rate is high despite the fact that primary school is compulsory. The government is consistently working on modernising the infrastructure which, in comparison to other African states, is already very good.
Despite the revival and economic boost seen here, many people continue to live below the poverty line.

The producer organisation has been BSCI-certified since the end of 2016. BSCI – these four letters stand for “Business Social Compliance Initiative” and encompass a code of conduct which was created by European business enterprises back in 2003. The aim of the code is to standardise and improve working and social practices in international trade – particularly in high-risk countries. The stringent requirements of the BSCI are based on international conventions, such as the United Nations’ Declaration of Human Rights and the International Labour Organization (ILO).

Between 2015 and 2017, we implemented a second on-site PPP. The funding partner this time was the German Investment Corporation (DEG).

The second PPP serves as an instrument to:

Ivoire Organics is funding its own modern packing house near the major city of Abidjan, where locally produced organic pineapples and coconuts will be prepared for export. Extensive processing technology will also be installed at the site to enable a wide range of products and create genuine added value from processing dried fruit, manufacturing fruit juices and coconut oil and filling and packaging the products. The packing house is scheduled for completion in the second half of 2018.

Organic pineapples from Abidjan are grown on a loamy, sandy soil. However, nutrients are lost more quickly because of the high proportion of sandy material. A trial is currently being carried out in a test field with selected catch crops that aims to counter this effect. By including local legume species, the aim is to increase the concentrations of humus and nitrogen in the soil.

An optimised water supply is also currently in planning. The urban conurbation around Abidjan offers a sufficient overall amount of water. However, in the dry season, there is frequently not enough rainfall to optimally cover demand. The situation is being alleviated by a new solar-powered pump that has been installed in a field belonging to Ivoire Organics. It springs into operation whenever the precipitation starts to become irregular. Water from the pump is freely available to anyone who needs it. The groundwater reservoir is filled on a regular basis in the rainy season.

“Compared to the first PPP in 2008, we have seen a significant development”, explains Kuemkwong Siemefo. “Approximately 150 containers of organic pineapples, organic mangos and organic coconuts are now being exported every year. The farmers in the organisation are able to identify with their work and that is a motivation for me, too.”

Around 200 small farmers and employees are now profiting directly from BioTropic and the producer organisation Ivoire Organics. If we assume that the average size of a family in an Ivorian household is five people, then we can assert that a total of 1,000 people are currently able to draw a benefit from this hand-in-hand project.

Ivoire Organics is certified by: